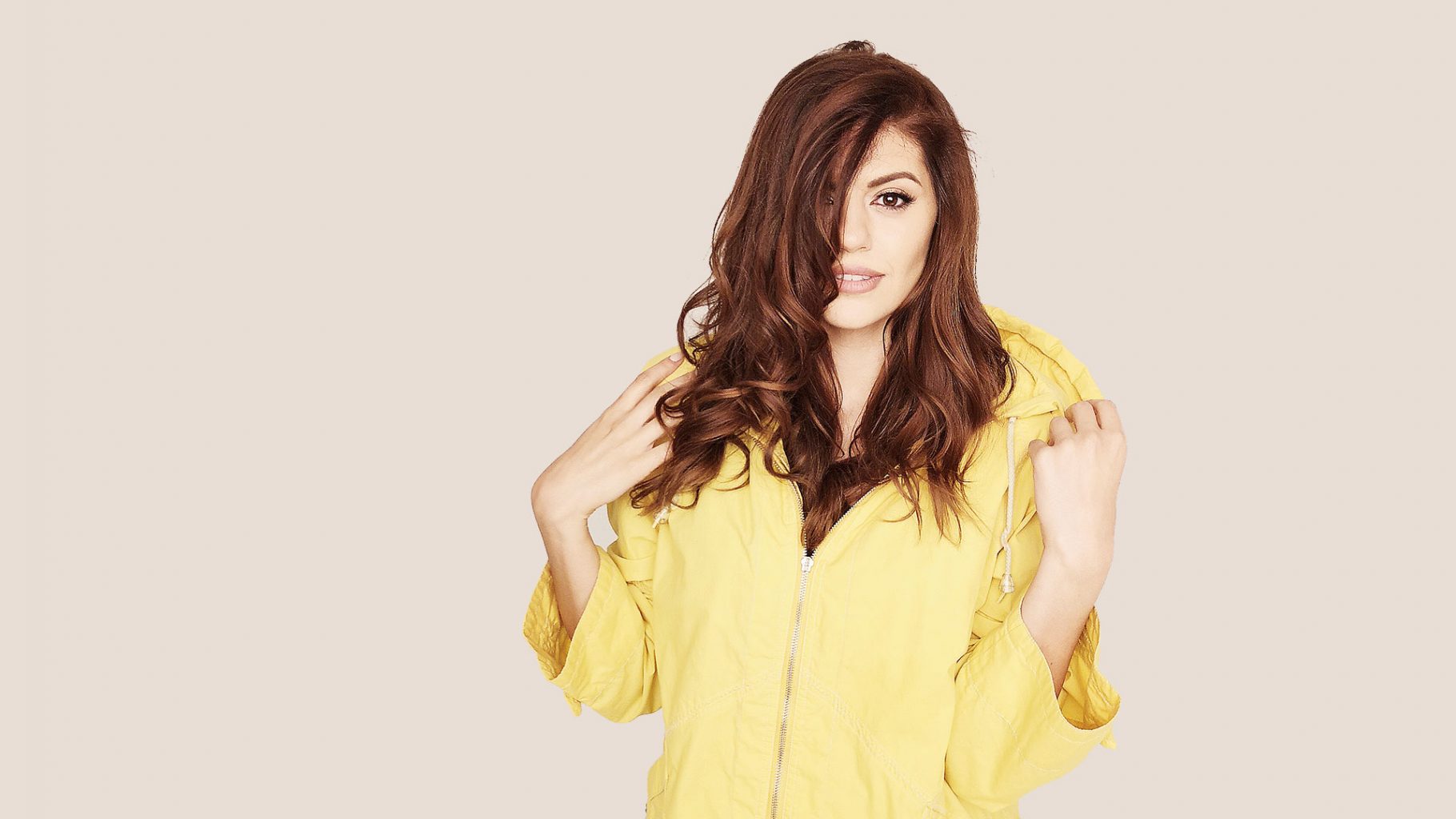 Mihaela Fileva (born 15 May, 1991) is a popular Bulgarian singer. Born in Veliko Turnovo she began playing the piano at the age of 6 but soon she found out that her talant was singing. As a child she appeared in the famous TV show “Hit -1”. Mihaela was a winner and finalist in many music festivals in Bulgaria and across Europe. After graduating high school Mihaela is admitted to the National Music Academy “Pancho Vladigerov” in Sofia, Bulgaria. In 2011 she went to the auditions of the first edition of the TV competition “Xfactor” in Bulgaria. She was one of the twelve finalists. Her appearance in the music reality was noticed by the music producer Vladimir Ampov – Grafa and soon after the end of the show she signed with the music label Monte Music. In 2012 Mihaela rose to fame with the release of the single “Kogato ti triablam”, duet with the rapper Billy Hlapeto.

In the beginning of 2013 Monte Music releases Mihaela Fileva’s single “Opasno blizki”, composed by Grafa and featured the newcomer Venzy. The song immediately turned into a smash hit and made Mihaela nationally popular. It was followed by three more hit singles in the same year – “A dano, ama nadali”, “Dai znak pak”, “Prilivi i otlivi”.
Being one of the favorite celebrities in Bulgaria, Mihaela Fileva was invited to start the TV reality show “VIP Dance” (2014, Nova TV). She amazed the viewers and the jury with her talant and perfection as a dancer. Mihaela come to the finals of the show but ranked second after the Bulgarian ice dancer Albena Denkova (Two time World champion in 2006-2007).
The productivity of the young artist didn’t stop growing – she started working on her debut album. Meanwhile three hit singles were released – “Ima li nachin”, “V reda na neshtata” and the first song written by Mihaela herself “I az sam tuk”.

In 2015 Monte Music released Mihaela Fileva’s debut album “Incognito”, lately awarded album of the year (BG Radio annual awards). Her singles “Na ryba na ludostta”, “Edno naum”, “Zabranen dostyp” and “Incognito” were on the top of the charts in Bulgaria.
In the following year (2016) Mihaela was a jury in the TV competition “Bulgaria’s got talant” aired on the National BTV. In 2017 Mihaela Fileva and her producers started working on her second album, which was released in May 2018. “Film za dvama”, “Tancuvam samo za teb”, “Konetz”, “Liubov”, “Boycott”, “Posledni dumi” /Last words/ and “Bez etiketi” /No labels/ were the hit singles released in the period 2016-2018.

In 2018 Monte Music released Mihaela Fileva’s second album “New page” nominated for album of the year ( BG Radio annual awards). It’s premiere was punctuated with a concert in Sofia live club on 29th of march.
The album also marks a new page for mobile photography. For the first time, the cover and all other CD images were captured entirely by cell phone – the new flagship Huawei P20 Pro, with its triple Leica camera, in the hands of photographer Vera Gotseva – Lomovera. In the album, fans could find a beautiful poster of Mihaela Fileva, also shot with Huawei P20 Pro, as well as all the lyrics of the songs from the release.

2019 is also very special year for young Mihaela. 18th of april was the date of her first solo concert whose creative director was Boyko Shtonov. The show took place in the National palace of culture in Sofia. It happened in front of a 4 000 audience, for which nearly two hours of music, dance and show had passed very quickly. It turned out that everyone with whom Mihaela Fileva had worked over the years supported her. On the stage alongside her appeared all her collegues she has collaborations with – Iskrata, Svilen Noev (Ostava), Divna and Preyah, Pavell & Venci Venc’, Vladimir Ampov – Grafa himself, VenZy, Billy The Kid. Mihaela also decided to share gratitude to all involved people – producers of Monte Music, the music director Borislav Boyadjiev – Borche, the musicians Vasil Krumov, Krasi Todorov, Vassil Voutev, Alexander Obretenov, the Trinity trio, the dancers from RiO Crew, and many thanks for the support to the media and the partners from Coca Cola and Huawei.

Actually Mihaela started her career with three successful collaborations – with the rapper Billy Hlapeto in “Kogato ti triabvam”, “Opasno blizki” featured Venzy, and the third was “A dano, ama nadali” together with Venzy and Grafa. Mihaela had other collaborations with all of these three artists lately through the years. In 2014 Mihaela Fileva and the talanted singer Nilolay Bakalov released the beautiful ballad “Ima li nachin”. In 2015 she collaborated with the divas Preyah and Divna for the big hit “Zabranen dostyp”. Together with the newcomer Iskrata Mihaela Fileva released one of the Bulgarian summer hits of 2016 “Tantzuvam samo za teb”. On 14th of February 2017 Mihaela Fileva and the hip-hop duet “Pavell and Venci’ Venc” released the smash hit “Liubov”.

Mihaela Fileva is an often guest of the Music theatres in Bulgaria. She takes part in many musicals and jazz concerts. Mihaela is part of the educational program “Fortissimo family” aimed at introducing the classical music to the children in an interactive way. Mihaela voiced the character of Smurfiette in Disney’s animation “Smurfs the lost village” as well as the character of the Bianca in the Russian animation “Sheep or wolf”. She recorded the songs for the soundtracks for both movies. Mihaela is part of the first season of the popular music TV show “BG Version” aired on the Bulgarian National TV. The positive image, brilliant look and successful career of Mihaela made her preferred celebrity for brands as Coca Cola, H&M, Huawei, Tantum Verde, Happy Bar and Grill restaurants etc.

Mihaela Fileva is involved in many charity campaigns, most often directed at children’s health and education. She is one of the major contributors to UNICEF’s massive initiatives, and also the campaigns of the Association of the Mothers of the Children with Down Syndrome.